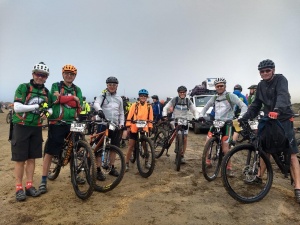 The CAMELBAK Ruapehu Express is an epic Mountain Bike adventure style event in the foothills of Mount Ruapehu.

Ten intrepid riders from the Onslow Dirt Babies headed off to Ohakune on Friday 23rd March in preparation for the CAMELBAK Ruapehu Express.

On Saturday we boarded a bus at the unreasonable hour of 7:00am for the journey to the start line.  The start was a on a volcanic plateau adjacent to the Desert Road some 23km north of Waiouru right on the boundary of Wanganui-Manawatu and the Waikato!

The morning was cold and damp with low cloud but with a forecast to warm up which led Gill into an infinite loop trying to decide whether to wear a jacket and whether the one she had borrowed from James made her look like a high-vis  bag-lady .

After a comprehensive pre-race briefing which included warnings of unexploded bombs, firing ranges and wayward army tanks we were set off in waves of 100 other keen riders at 8:30.

The course had a bit of everything:

The pace was relentless and no chance to let up, the course required full concentration the whole time.  There were plenty of crashes, mainly from people trying to exit ruts and bogs.  Ebikes smattered through the field created some chaos.    It was an epic ride through great scenery and after 56km we rounded the last corner with the finish line in sight for one last push into a reasonable head wind.

Whilst there was the inevitable slip and skid, I am pleased to say that all 10 riders made it home injury free with no big crashes as Allan was absent this year.

We all attended the prize giving in the hope of winning a new MTB, but after numerous CamelBaks were given away, a walker won the MTB.   Later that evening we had a chance to ‘rehydrate’ and tell exaggerated stories of how we conquered the course earlier in the day over an excellent meal at a local restaurant.

Sunday morning presented another opportunity to prove we are made of the right stuff with a timed road bike ride up to the Turoa ski field.  The Ohakune Mountain Road is the only UCI rated Category 1 climb in New Zealand.  It is 16km of pure joy, a gentle climb of 1000m with places where the incline pitches to 18%.  The trick is to NEVER stop until you get to the top.  After 1 hour 25 minutes we were all at the top carpark and fortunately Jill (Ellison) drove the car with all our warm jackets so we could descend without freezing before meeting up at the bottom for coffee in Ohakune.

A fantastic weekend, perfect weather and great camaraderie. The Ruapehu Express has been running for three years now and from what I could see it gets better each year.  I’ll be back.

Thanks to Gill Gray for allowing us to stay at the Rangitikei Ski Lodge.