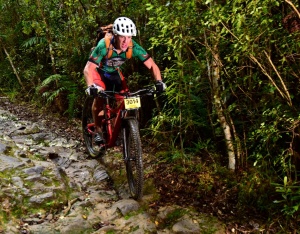 What’s there to complain about???

It’s a day of being outside in a most beautiful part of Wellington; and challenging oneself on your bike. Trust me, I would rather be at Karapoti than in the office!

And it doesn’t need to be a Suffer-Fest (seriously) and you need not use Rule No. 5 (HTFU); to me it’s all about your approach and attitude.

The pre-race training with Dougal (and sometimes with other brave soul’s in the ODB clan) was worth it in itself. Although physically demanding, it was also a journey of building friendships and networks; I know both Dougal and I seriously appreciated GY (Graeme Young’s) experienced insights and support – both before, during and after the event.

Oh – and one of my worries was the anticipated “crowds” of competitors and being bumped on the gnarly sections. To be honest, that wasn’t the case and if there was somebody around, there was an underlying silent law of comradeship and respect.

And finally, I personally was literally blown away by the behaviours of the elite Kiwi athletes who stood on the podium at prize-giving. They spoke well of their competitors and were friendly, engaging, approachable, humble, encouraging. They gained an instant fan in me and a massive dose of respect.

In summary, with my hand on my heart, I will encourage you all to consider taking up next year’s challenge. The benefits I gained from the Karapoti far outweigh any concerns about the event itself.

Is there a more iconic mountain bike race in Wellington than the Karapoti Classic? 33 years old and going strong. Starting with the mad dash through the Akatarawa River, the tone is set early.  Fortunately, the dry Wellington summer meant the river was lower than normal - only mid-thigh deep for us tall folk.  Up the gorge road then onto the gorge track proper, 5-6km of the flattest riding for the day.  All advice of pacing yourself up the gorge was thrown out the window as the red mist descended and the heart rate hit the roof - there were places to be made up!  Shortly we reach the first climb, ironically named the warm up hill, and it isn't one of the big three at Karapoti.  Even though it's only 1.5km long, the gradient means it's a challenge to avoid walking.  Fortunately, some recent rain had actually caused the dusty surface to improve since the ODB recce ride a few weeks earlier and the hill was dispatched with only a small amount of swearing.  However, the humidity was up, so plenty of sweating was going on, which will cause plenty of problems later on!

A very brief downhill respite from the warm hill and straight onto the first of the three major climbs, Deadwood.  Over 2km of constant grind and we join the throngs of walkers pushing their bikes.  Traffic and loose rock makes it very difficult to maintain a tempo climbing here.  The section after Deadwood disappears into a twilight zone of rolling hills/pinches, sapping energy before arriving at the top of the infamous Rock Garden.  The "highlight" of Karapoti, the Rock Garden consists of a 3km downhill over soccer ball sized rocks and metre high drops.  A combination of arse clenching riding and scrambling on foot ensures the main goal of survival is achieved.  The Rock Garden is not a place to make light of, at least two riders were helicoptered out of there on race day, including a pro/elite rider.  With the good conditions of 2018, it doesn't bear thinking about what it would be like on a bad year.

With the first signs of cramp making their alarming presence known, the adrenaline of surviving the Rock Garden disappears instantly at the sight of the wall that is the Devils Staircase. There isn't a longer 2km climb around.  While the upper sections are ridable, the lower sections are strictly push/carry your bike stuff.  The sight of Graeme Young pushing his bike during the ODB recce was mentally damaging to the rest of us mere mortals!  The top of the Devil's Staircase marks the halfway point, although two of three major climbs done.  A well placed aid station allows a quick refill as we are 2 hours in and plenty of ground to go.

The course turns downhill, over 10kms for searing speed down "big ring boulevard".  Rest is minimal while continuing to push to keep the speed up  . . . ensuring the legs don't lock up completely.  Periods of cramp were setting in for the ride and getting pretty nasty.  At the bottom of the hill we pass Allan's swimming hole and head for the final climb, Dopers. Dopers is also referred to as The Pram Track; aptly named as this is where one starts to “throw your toys out the cot”!.  Dopers is the longest and gentlest of the three climbs, but with over 300m climbing over 3kms you are made to pay a heavy toll for all your sins - of not eating enough, sweating too much and generally pushing too hard at the start (remember the fast pace in the gorge?!).  Long periods of walking result.  You go to a very dark mental place toward to the top of Dopers, a place we don't visit often, for good reason - DNF anyone?

But eventually Dopers is done and the descent starts.  This descent, while nothing like the technical challenge of the rock garden, is very fast with many ruts and sharp corners there to catch you unawares.  It is delicate balance between risk and reward descending, bravery versus fatigue.  A misstep can quickly undo all the efforts of the earlier part of the day.  Blink and you are back at the gorge.  Fighting painful cramp every time the legs touch the water (too many river/creek crossing to recall) and we are back in the big ring for the sprint/hobble down the gorge towards the finish.

All that remains is to recross the river and roll over the finish line.  With cramps in thighs, calves and arms, the prospect of drowning if you fall over in the river seems a very real possibility. Then we are done, a proper tough day out, a massive smile appears on the face and the pain melts away.