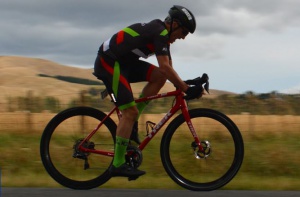 Here’s a summary from a super “little” racer that should stand as inspiration for all of us couch potatoes who don’t always get to the start line.

A weekend of laugh’s, pain, success and OC comradery from Andrew Campbell

“This is the first time I have done this event, I was always unsure of whether or not my legs were up to 3 events in one and half days.

Fortunately I received some solid advice from Nick Kyle that it was “no problem” and I would be fine riding in B grade - so I took the plunge and signed up.

We arrived with no prep time, no warm up, just hit the line and ride….hard – with a tail wind going out, and a very strong head wind home.

We all lined up by grade in alphabetical order and it was impressive watching Stu, Wriggles and Banksie power away - then came my turn. Plan was to go as hard as possible and try to hold a good rhythm. That worked well for 4km then I got a full blast of the head wind and suddenly my legs are screaming and lungs heaving - I'm grimly hanging on with the sight of the finish line 2kms in the distance creeping toward me like a mirage (never any closer) The only thing keeping me pedaling was the embarrassing thought of being passed by the rider behind.

At the end of this stage I was 13th out of 15, cursing Nick and not looking forward to the afternoons stage.

Show time and the wind had got seriously worse, as had my appetite for any racing.

I spent most of this stage groveling in the brutal crosswinds and trying not to be dropped under the continual attacks. Eventually one attack stuck (thank god) and things settled down. Jose impressively rode away on his own to win this stage - I stuck in the bunch and made up a few places by the stage finish

The chat on the drive home was mainly focused on cursing the crap weather we get every time we race - I managed to save a few curses for Nick as well.

I slept like rubbish of course, alarm went off way too early and my morale was low !

1stlesson learnt – got to the start line with plenty of spare time and a coffee in me - added to this the sun was out, it was warm and the wind was moderate – nice.

This stage is basically the Millers road loop with a couple of good kickers near the end at Hinakura.

My legs were sore but as long as everyone took it easy (as Banksie assured me they would) then I should be able to make it to the finish line ok. Unfortunately the attacks started immediately and it was bloody Banksie leading most of them. The attacks continued nonstop, I was toast, I couldn’t recover and no amount of fueling could help.

Eventually Oliver Ferry attacked and finally gapped the bunch - they weren’t having it and repeatedly surged after him. A moments inattention by me became a gap I just couldn't bridge, “this is it, I’m gone” then Chris Bloor rides past and for the next 3km I grimly hang on his wheel till he rode us back onto the bunch.  Thanks Chris !

On the next small climb the group blew apart yet surprisingly my legs actually felt quite good and there I was in the front group………with 5km to go there was another surge into the head wind (by Banksie again !) and this time I was toast.

The front group of four rode away to fight for glory and I had enough in the legs to hold onto 5th - ended up 5th overall on GC.  My “mate” Banksie got 2nd on the stage and 4th overall.

2nd lesson learnt – never give up, I was gone OTA and could have sat up, but suffering on Chris’s wheel ended up saving my whole weekend.

On the drive home I was thinking how Nicks advice was not so bad after all :-)

The whole weekend was an awful lot of fun - Martinborough is a great location, there were a lot of other OC riders racing so plenty of friendly faces around with a lot of laughs (tears) before and after each stage.

The racing was a real battle - it always is - but there's always that unexpected moment in the race where the effort pays off and makes it all worthwhile.

God willing I will be back again next year !