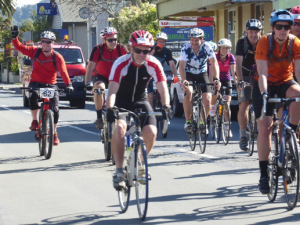 From our intrepid report David Lloyd:

The Milk and Honey Race is a two-bike race from Takaka in Golden Bay up to the top of Takaka Hill on a road bike, then you swap onto your mountain bike and ride Canaan Road, before heading onto the Rameka Track and back to Takaka over 18ks of technical single track.

As Golden Bay is one of our favourite parts of New Zealand, and Anne’s birthday is always around Labour Weekend, it was an easy sell to head to Golden bay midday on Thursday for an extended Labour Weekend / Birthday / bike ride all rolled into one.

Golden Bay is a reasonably remote part of New Zealand and the overland route would see us taking a 3-4 hour ferry crossing, and then about a 3-and-a-half-hour drive to Golden Bay and then the return journey all in a four day weekend.  In order to make this more time efficient, we opted to fly to Nelson and rent a car, the compromise being that there would only be room for 1 bike, so I was up for doing the whole ride on my mountain bike, with newly purchased summer tyres for reduced rolling resistance and ‘speed’ on the road.

The event is the smallest official event I’ve been in, with 134 total competitors, with a total of 107 individuals and teams completing the whole event.  The teams were for two people, split between the road and MTB sections.

Realising two days before the event that I didn’t have my MTB shoes was a blessing.  Being in Golden Bay wasn’t.  The local bike shop unsurprisingly doesn’t do MTB shoes, so it was buy a pair of flat pedals, then off to the local shoe shop for some gym shoes to ride in.  1 pair of pedals and 3 pairs of shoes later (you didn’t expect Anne not to get some shoes did you) and I was all set to go.

My preparation for the one bike event was to twice ride from home to our weekly Dirtbabies MTB ride via the Makara loop, before doing the MTB ride and then returning home via skyline – enough, I hoped.  The event was on the Sunday before labour day, and I had a nice tapering ride of a 1 hour 20 uphill climb up Rameka Creek road (gravel) before returning down the lower part of the next day’s single track to give me an indication of what I was in for.

On the day, I rode the 10ks from Pohara to Takaka, ready for the 9:30am race briefing and the 10am start – leisurely start times to say the least.  Prize giving was at 3pm, which was of a slight concern because my time estimates indicated that I would be pushing that time limit based on what I expected my road times to be, without really knowing anything about the technical difficulty of the MTB section.  Riding round the car park before the start of the race, it reminded me of a scene from a David Attenborough documentary – plenty of Gazelles and Antelopes, possibly even a few cheetahs, but on this day, the Hippopotamus’s looked to be drinking somewhere else.  Worrying, I thought.  The turn out of 1 only bikes this year was double last, with 20 of us, but my observation of them indicated that most of them were less than half my age.  Pre-race briefing indicated another concern, with a cutoff time at the transition 4ks past the top of Takaka Hill on Canaan’s Road of 12:30.

Resplendent in red and ready to go 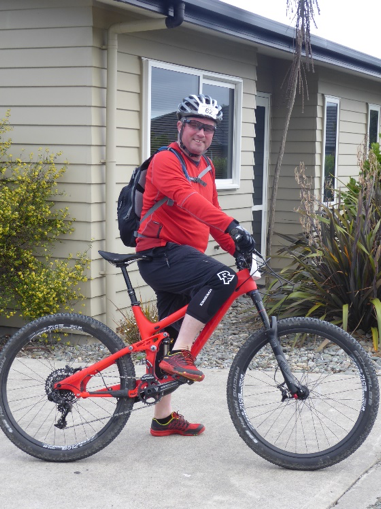 The race start was an orderly affair, with us lead out of town by a pace car, until we got to the 100kph sign, when we were let loose for the race proper to begin.  The pack were soon heading off into the distance never to be seen again, and I settled in to a small bunch of 4 MTBers – two very petite woman – Ash and Perri, Steve from Taupo and me. We worked well as a team, and covered the 22ks to the bottom of Takaka Hill in a credible 50 minutes.  At the hour mark, I got round the first hair pin, and at 1 hour ten, the second one – steady progress.  It was just before this personal milestone that the King of The Mountain prize was being taken out by George Bennet in a time of 1 hour and 8 minutes – I’ve heard that name somewhere before.  The day was mostly overcast with no wind, but on some of the sections, I was in full sun, with no wind, and it was like someone had turned on a tap inside my helmet.  On and on, I soldiered, passing two people, being passed back by 1, and finally at just on midday, my wheels were heading down hill and I passed through the transition at 12:06 well inside the cut-off time.

Canaan Road is described as a 12km gravel road with a 200m gain in altitude – sounds like a false flat.  This is a lie.  In reality, after Takaka Hill, you get a reprieve for 4ks downhill on the road, another 2.5k flatish on gravel, and then you climb 200m in 3ks.  I’ve just watched documentary about the ride where Jonathan Kennet described that bit as the sting in the tail.  The last straw would be another way to describe it.

A good blast downhill for a couple of ks, followed by some flat and I got to the end of Canaan Road and a stop at the marshalling point.  It was at this point at just on 3hrs that I took on my first food – 4 chewy sweets from the marshals – note to self:  don’t do that again!  Bring a Bento Box, or a top with pockets – yes Frank, a mountain biking cycle top with pockets – what a good idea.

Standing at the Marshal point, the track ahead was plainly visible.  The first piece of single track zig zagging its way up a low hill.  Easy enough I thought, and off I went.  3 hours, 4 chewy lollies, 1100m of climbing and then I start asking my legs for short sharp burst of acceleration to power over rocks, roots and through narrow technical sections – not happening, Bro.  The next bit was pretty ugly, as my legs got used to the new demands, took some time to recover some leg strength, and my brain went from aimlessly wondering about anything and everything to suddenly being full concentration and into panic / survival mode as the track all of a sudden got very technical.  I realised after a while that all though I wasn’t having to work very hard, my heart felt like it would burst out of my chest.  This was just the effect of riding of what for me is concentrated technical track with all sorts of obstacles and possibilities for inflicting serious harm on myself if I wasn’t very good or very careful.

This is just the warm up.  It’s called the roller coaster a 2km stretch of twisting, turning, climbing, descending, dropping grade 3 (felt like 6 at the time to me) single track.  Nothing to scary, just a bit technical if you’re used to the tracks of Makara and Polhill, and as I say if you’re a.) exhausted and b.) freaking out just a tad it probably seems worse than it really is.  You exit into the carpark at Harwoods Hole and from there it’s a short, but by this stage, tiring 4wd track to the start of the Rameka Track.  From the car park, I could see some riders ahead of me and they seemed to be going really, really slowly.  “I should catch them” I thought.  As I say, the track didn’t seem like much, but I was soon enough going at their same snail’s pace, so I eventually got off the bike and walked the last 200m to the marshall point – a nice change of position that felt like a break.

Climbing done for the day, it’s now the start of the Rameka Track.  At close to the highest elevation for the day, you spend 5ks riding a mostly flat but ultimately slightly downhill beautiful piece of single track – it’s a bit too technical for me in places , but still great fun.  The track traverses pristine forest of the Abel Tasman National Park, which I was riding most of the way, but every so often it would just get too technical – stretches of rocks or roots that you had to power over or risk ending up on – which I’d have to push the bike through.  The track was wet and pretty slippery on account of all the recent rain, but safe as long as you kept your wits about you.  There were lots of river crossings as well, but it all just added to the variety.  It was on the Rameka Track that Steve from Taupo caught back up with me, and we then stayed together until the end.

From the Rameka Track it’s onto the Pack Track – a link track the Golden Bay Mountain Bike club has created to link the Rameka Track to the Rameka Project.  This is more your Makara style levelled tracks and from here on it was pretty much full time on the bike.  The Pack Track links to Great Expectations an intermediate level track within the Rameka Project, a 90-hectare forest created as a carbon sink (suck up CO2 and help the plant) that is being developed into a non-motorised recreational reserve – walkers and MTBers.  At the bottom of the descent, there is a 2km section called 2 clicks which is pretty technical bouncing along beside the river.  I’d ridden it the day before and it was hugely fun and mostly rideable as long as long as you didn’t look at what you were riding over, but focused on where you were trying to get to, but after 5 hours it was more challenging and we were on and off the bikes much more than the previous day.

From there it’s down the road and about 5ks back to Takaka to complete what is a truly iconic ride taking in one of New Zealand’s great road bike climbs, some superb scenery and fantastic and flowing single track.

Steve and I arrived during prize giving, so got a big cheer for our efforts.  Wow, what a day. 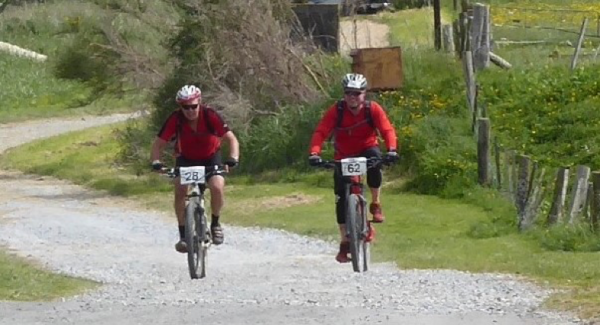 I finished the event thinking “that’s it, never again”, and the next day I was thinking “no, probably not”, but a few weeks on, “why not” it was a great day out.  I’d like it if the Clydesdales could leave an hour earlier than the rest.  The KoM guys would still beat me to the top, and by the time I got off the gravel road an hour later, all the fast people would have got past me, but I’d get back before both the prize giving and the food and drink stalls closed.

This really is a great ride, but if you don’t want to do the event, or your in Golden Bay, you can do it any time as all of the MTB section is open all year round.  The Rameka Track is still a paper road, so although it goes through the Abel Tasman Naitonal Park you are allowed to ride it, and with the Golden Bay MTB Club being so active, they are always upgrading the tracks.  If you just want to do some MTBing, you can do the reverse ride, by riding up Rameka Creek Road and then getting on the track at any point – the bottom of Great Expectations, or Pack Track and riding all the way back to Harwood’s Hole.

Anyway, here’s some stats for those that are interested, and are thinking of doing it.