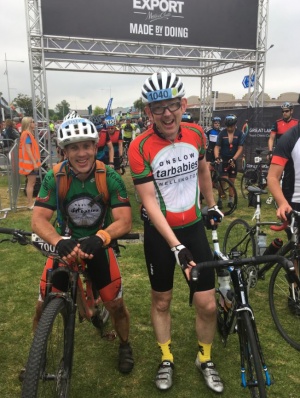 For 2017 Taupo turned on a fantastic day with mild temperatures and no wind.  As has become the norm the OTBers churned out numerous PB's and rode with panache.

We can make special mention of Janet Chilton in the 320Km Enduro  and Larri Wallbridge in the 60Km Huka Steamer both of whom won their age groups.

In the Classic Matthew Stevens hung in there to finish with the seriously whittled down main bunch - in an impressive time of 3:53:59

The Mountain Bikers again had great age group results with Kara Daly 2nd in the Huka Cruiser (1:53)  and in the Huka Steamer  Larri placing 1st (3:48) Phil Orchard 2nd (4:02) and Steve Strain 3rd (3:30) in their age groups respectively.  Dougal Hamilton had a stonking 5:24 time for the 85km Huka challenge and the ever young Graeme storming through the 85Km Huka XL (Elite) in a seriously rapid 4:29.

There were only two mechanicals and one puncture across the entire group this year and the outstanding good Samaritan performer was Paul Barnes (Digger) who handed his bike over so a younger rider who'd snapped his chain could finish - great spirit!

As always the OTB raised more charitable funds to go to the Wellington Free Ambulance, we will be formally making the donation before the end of the year.

Finally congratulations to everyone for participating - there's no gain without pain - and how GOOD did it feel when you'd finished !

The results can be viewed here